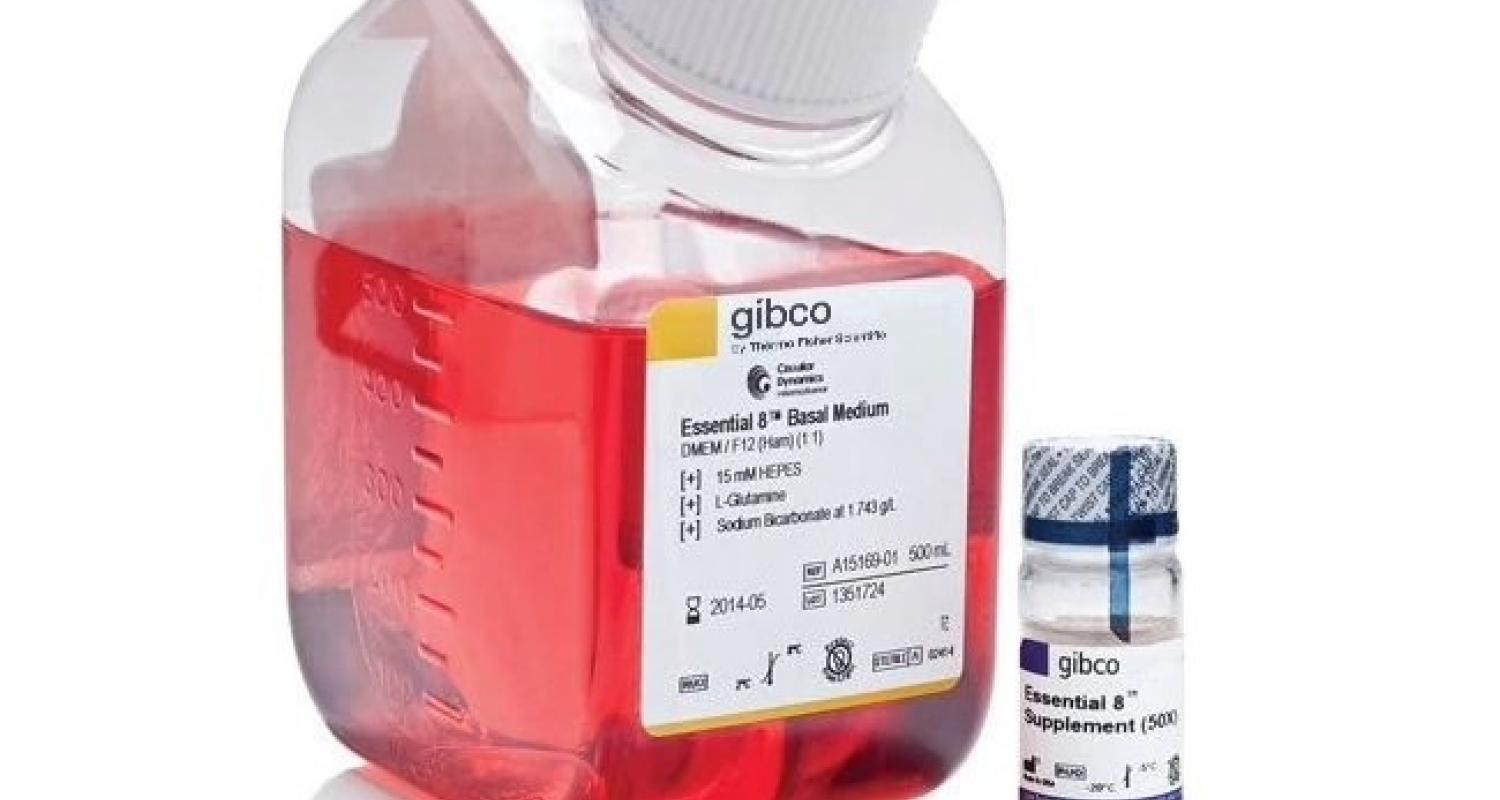 A culture medium is a substance containing all the essential nutrients like carbohydrates, fats, proteins, salts, and vitamins that a cell needs to grow.

As the culture medium diffuses into the cell, the cell will grow, divide, and the cell line will proliferate.

Culture medium is an instrumental part of cellular agriculture and generating cultured tissue because it’s effectively what allows us to take a relatively small sample of animal stem cells and end up with enough to constitute an entire cut of meat. These stem cells are allowed to grow in a bioreactor containing culture medium where they are exposed to a range of environmental cues that encourage them to differentiate into the specialized kinds of cells we get in meat.

In order to supply all the essential nutrients to the cell, the culture medium usually consists of a basal mixture supplemented with extra growth factors.

And so, in order to try to replicate this, cellular agriculture has for a while leveraged a supplement called fetal bovine serum (FBS) which, as it sounds, is the blood of a cow fetus. The two issues with this are that a) it is reliant on animals, hence defeating one of the primary goals of cellular agriculture, and b) it is expensive because it is so inaccessible.

There is currently no other substance that we can easily obtain that can single-handedly provide all these growth factors, so we turn to making them all individually using recombinant protein production. This works by inserting the DNA coding for whatever protein we want into a living organism (like yeast or bacteria) and feeding it sugar so that it makes copies of this DNA. But, at the moment, this too is expensive.

This naturally leads us to one of the biggest challenges facing cellular agriculture: finding the ideal culture medium that is simple, can stimulate proliferation, is unreliant on animals, is accessible, and is cheap.

Essential 8 is a culture medium that came about by refining the TeSR culture medium, which contained 19 ingredients, and cutting it down to the eight that were deemed “essential” for cell growth. It is a serum-free culture medium (i.e., doesn’t contain animal byproducts) which has been used to grow numerous kinds of cells from many different species.

It also only costs $376.80 per liter. But since culturing a burger, for instance, will require more than one liter of culture medium, this puts our starting cost for a burger product at well over $400. Needless to say, this would not be able to compete with current meat products.

But still, Essential 8 remains a relatively good starting point for trying to create a culture medium that meets all the above criteria. The Good Food Institute recently released a report entitled An analysis of culture medium costs and production volumes for cultivated meat in which they explored seven realistic ways to reduce the cost of the Essential 8 medium enough for it to be able to produce cost-competitive meat products. Here, we’re going to go over what those scenarios entail.

The points of these solutions are to be realistic — meaning they can be done with out some sort of major technological advancement — and also based on conservative estimates — meaning costs could likely be reduced even further.

What makes Essential 8 this expensive?

As we saw above, Essential 8 is made up of eight ingredients. They are,

As we can see:

What changes can be made?

If we want to decrease the cost of the culture medium, we should start by trying to cut the cost associated with the growth factors, HEPES and AA2P. This can be done either by reducing the amount they are present in the media, sourcing them at a lower cost, or replacing them with a cheaper alternative.

Scenario A: Divide all growth factor concentrations by 10

The first solution is to just significantly reduce the amount of growth factors. At first this might seem counterproductive — won’t this just hinder cell growth? But in fact it can be done by:

Scenario B: Produce FGF-2 and TGF-beta at larger scales

Right now, insulin and transferrin are produced much more cheaply than FGF-2 and TGF-beta, in part because they are produced at a much larger scale.

If we scale up production of FGF-2 and TGF-beta so their costs per gram are equivalent to those of insulin and transferrin, costs could fall to $800 and $16 per 20,000 liters, respectively. This would put the overall culture medium cost at $14.54 per liter.

Now, this may seem a bit too simple. But scientifically, scaling up production should be entirely feasible since FGF-2 and TGF-beta are molecularly less complex than insulin and transferrin. However, producing these growth factors at this scale would necessitate an initial investment in equipment and facilities, as well the demand to make such investments practical.

Scenario C: Scenario A + Scenario B

Scenario A and Scenario B deal with two separate aspects of the culture medium. In this way, combining them shouldn’t lead to any sort of conflict (i.e., encouraging one shouldn’t hinder the other). It’s also possible that the two will work synergistically (improvements on one front will lead to even more improvement on the other front), but that wasn’t assumed in calculating the cost.

This would require us to produce the growth factors on an industrial scale equivalent to the way we currently produce enzymes such as lipase, cellulase, and amylase. Again, this is scientifically feasible given that our growth factors are molecularly simpler than enzymes. But as in Scenario B, a higher demand and considerable initial investment would be needed to reach those economies of scale.

This estimate is actually quite conservative considering that we do produce many enzymes at a rate of 10 cents per gram, and so we might even be able to produce several times more growth factors for this cost. This brings the cost down to $3.74 per liter.

Currently, the components of the basal medium are bought at a pharmaceutical grade. The cheaper alternative would be to buy them at food grade.

AA2P is a long acting vitamin C derivative often used in cell cultures. Food grade ascorbic acid degrades faster than ascorbic acid 2-phosphate. However, its relative cost benefits still outweigh its functionality deficits. For instance, if 10 times as much ascorbic acid would be needed to achieve the same effects as AA2P, the overall cost would still be 99.6% less.

TES is a pH buffer with a similar pH range, solubility, and pK_a to HEPES, but it only costs half as much.

There is also the argument that we might not even need to rely so heavily on HEPES in the first place because it is most effective for cultures where the cells are frequently taken out of their CO_2 supplemented conditions or when metabolites accumulate. This is not likely in the kinds of closed culture, continuous perfusion/filtration cultures we’re considering for meat, and so we might be able to deduct even more of the cost.

Another minor measure which might help decrease the price is just reducing the number of ingredients involved in DMEM to the essential amino acids which can not be independently produced by a cell. But because this might stress the cells and hinder their growth, its cost benefits would have to be weighed against the productivity tradeoff.

The other possibility is to eliminate ingredients which are impractical for a specific set up. For instance, DMEM contains phenol red — a colorimetric pH indicator which changes colour based on the pH. However, if the bioreactor uses remote pH monitors, this addition would be redundant and so we can save more on the cost by getting rid of it.

How much would meat production cost?

Now comes the question of how much producing a specific amount of meat — let’s say a kilogram — would actually cost. This depends on how much culture medium those cells require and how much the culture medium costs.

Step 1: Number of cells per bioreactor

The growth configuration we’re going to be focusing on is the batch process. This entails cells being grown in batches which are all harvested for use at once. This is different (and less efficient) than the continuous or semi-continuous process which is more of a perpetual letting cells grow and collecting them. The reason we’re going with the less efficient process is to ensure our estimates are not optimistic.

We’ll consider a 20,000-liter bioreactor which is near the upper bound in terms of size feasibility. While bigger bioreactors definitely exist, animal cells aren’t typically able to withstand the amount of pressure present in those models.

Cells proliferate best in what is called a seed train bioreactor, so we’ll start them off here. Once we want them to differentiate and structure onto the scaffold, we’ll put them into a perfusion bioreactor.

In a seed train bioreactor, minimum cell density requirements are considered to be 200,000 cells/ml — anything much lower will trigger cell apoptosis. Maximum cell density is 4 x 10⁷ cells/mL. So, in the proliferation stage, we’ll:

Expanding the culture from the minimum to the maximum density will take a 200 fold increase. Since we want to start our cells from a small frozen vile, we’ll have our largest seed train bioreactor be 20,000 L, the middle one be 100 L, and the smallest be 0.5 L, which can be filled from a 2.5 mL frozen tube.

Expanding the culture from the minimum to the maximum density will take a 200-fold increase, which is just under eight doublings. According to Accelta, a 50- to 100-fold increase takes about seven days, so doubling time is calculated to be 28 hours, making our total eight periods 9.3—or about 10 days.

Since we have three of these seed train bioreactor phases to go through, this puts the process at about 30 days.

After, we want to seed our cells onto a scaffold so they can mature in a certain configuration. This takes an additional 10 days, bringing the total time to 40 days.

We’re going to consider the average cell volume to be 5,000 micrometers³ per cell (this is a rough estimate as different kinds of cells in different species will be larger or smaller). A cubic meter of ground meat weighs about 881 kg, which includes some fat.

This puts our total yield at:

Now, this all has to be put into the perfusion bioreactor for differentiation. So, we’ll round up to 4,000 kg and double it to account for the necessary “void space” in and around the cells. This puts our bioreactor’s spatial requirements at about 8,000 L.

Now we’re going to calculate a couple different possibilities for how much culture medium we require.

The minimum amount we require is enough to fill the largest bioreactor, which is 20,000 L. This assumes that the culture medium is never replaced.

The maximum amount we require is if we change the culture medium every 2 days which amounts to 5 medium changes for each phase, or:

Then, we can take the average medium requirement, which is halfway between these two bounds, at 80,000 L.

Using this, we can figure out the cost per kg of meat for each of the media uses under each scenario. Scenario G, low media use, is $1.37 per kg. Just to put this in context, the average production cost for a kilogram of ground beef is $7.62 USD.

And of course, these prices don’t take into account the other raw costs that would go into production such as labor and energy required to power the bioreactor. Additionally, while the estimates were conservative and technically realistic, they would still require some major preliminary investments in order to get them started.

But, still, in light of these potential concerns, it is indisputable that generating a kilogram of meat for less than 2 dollars is better than just under 400. The author of the Good Food Institute’s study maintained that the results were optimistic and suggest that “it is likely that cultivated meat is capable of ultimately being cost-competitive with conventional meat production at scale”.