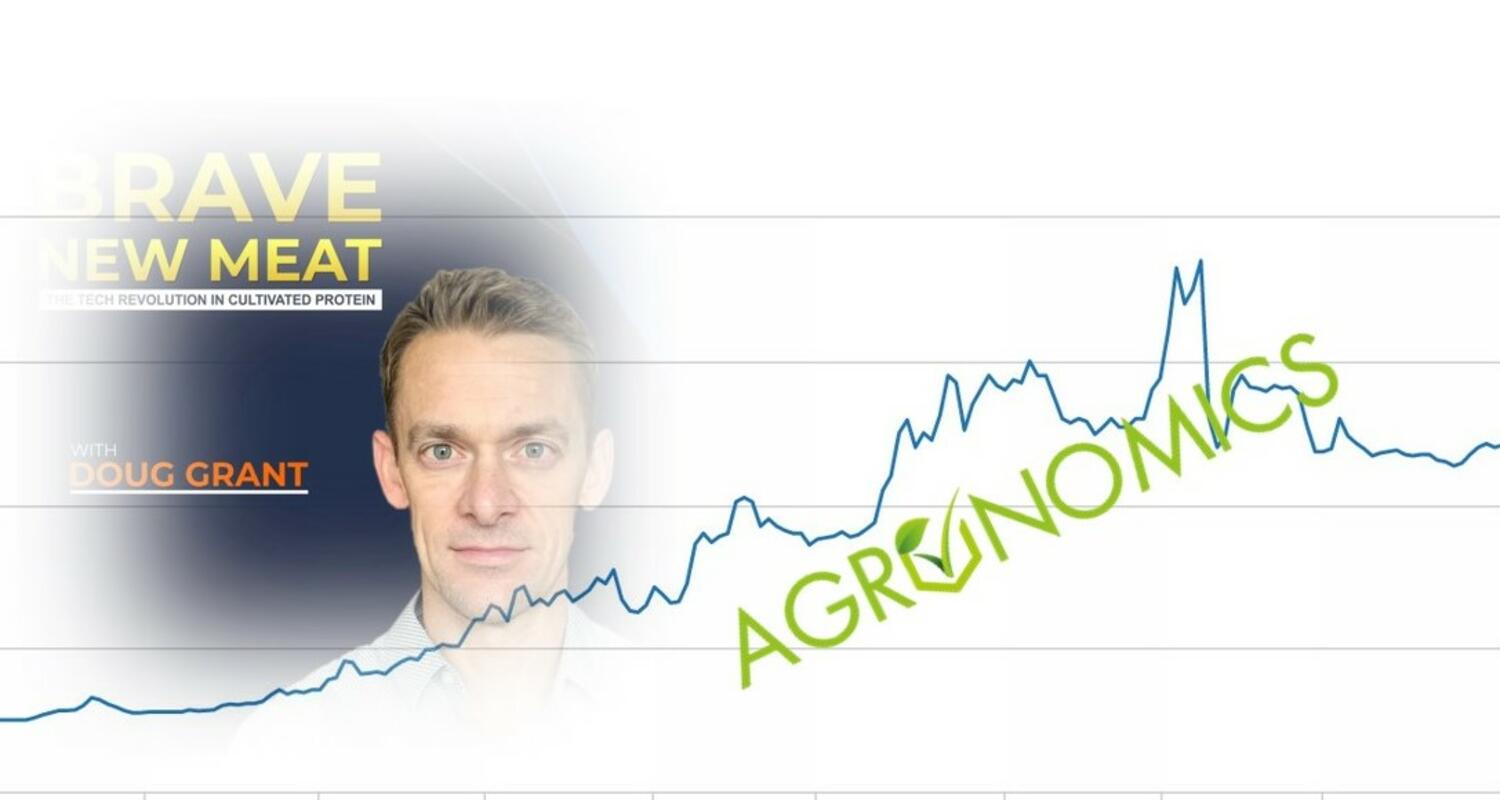 Disclosure: I am invested in Agronomics. This analysis is for informational purposes only and is not investment advice. I am not an investment advisor, nor am I compensated by Agronomics, Protein Report, or any other entity for this content.

“Well, certainly, in 10 years many things will evolve; technology will change […] But I would always encourage people, when they think about ten years, to ask the question, what won’t change?” — Jeff Bezos

In the last ten years, the average American has witnessed sweeping changes at the supermarket. What began as a handful of brands offering soy-based hamburger patties and a few pricey dairy alternatives to a niche customer has become a multi-billion-dollar consumer sector.

But alternative proteins are at an interesting crossroads; despite their growing popularity in the United States, those in the developing world — where populations are growing most rapidly — still hunger for the real thing.

So when one of the most successful entrepreneurs in history advises us to consider what won’t be different ten years from now, a strong global demand for meat is a reliable answer.

We know this because the data backs it up: In virtually every culture, as wealth increases, so too does animal protein consumption.

Meat demand will continue to grow as the population increases, and the world can’t produce enough meat through conventional animal farming alone. This is as succinct and persuasive an argument as can be made for investing in cultivated meat and alternative protein.

Investing in this sector has been incredibly lucrative for those who got in early. For instance, those who saw the potential of Beyond Meat rode that wave to one of the most successful IPOs in the last decade, and the company is currently valued at $9 billion.

It’s a staggering figure but it’s important to note that plant-based protein companies are still nibbling at the edge of meat — the consumption of which is both a massive sustainability dilemma and a $1.7-trillion-dollar market that continues to grow.

Alternative protein, despite the notable successes of Beyond Meat, Impossible Foods, and a handful of others companies, is still in its infancy. That means that there’s still plenty of opportunity for investors interested in this steadily growing sector. But for those investors drawn to cutting-edge technology, cultivated meat may be an even more attractive prospect.

Rarely do retail investors have the opportunity to gain exposure and access to a new technology this early. That’s partly because Agronomics — which bills itself as “a thematic investment play into the clean meat sector” — is one of the only publicly traded options available to those who see the potential in cultivated meat. By offering investors a deep portfolio of companies engaged in the work of getting cultivated meat to market, the risk to the individual of backing a company whose tech doesn’t pan out is somewhat mitigated.

The Potential of Cultivated Meat Technology

No other protein source asks for so little change in consumer preference. The product is still animal meat. Other alt-proteins require consumers to adapt to a product that is “similar” to meat — whereas cultivated meat represents the potential for rapid mass adoption.

The first forays into cultivated meat date back to 2013 when Mark Post received funding from Sergey Brin and other investors to create the world’s first cultivated burger, which cost approximately $300,000 to produce. Post went on to co-found Mosa Meat, which is in the Agronomics portfolio.

Creating cultivated meat has been described as a process similar to fermenting beer, however, there are significant differences. At a basic level, cultivated meat is grown from animal cells in a bioreactor using growth media. The cells may leverage a scaffolding material to form a “structured” meat like steak or a chicken breast — or “unstructured,” as with ground beef.

While this technology as applied to the creation of cultivated meat may be novel, its roots are in biomedical engineering, where similar techniques have long been used. The result is “real” meat, unlike the plant-based proteins currently offered by Beyond Meat or Impossible Foods. However, after the initial biopsy to obtain starter cells, animals are completely removed from the process — a critical step toward addressing climate change and preventing future pandemics.

A recent RethinkX report forecast alternative proteins from cultivated meat, plant-based products, and fermentation to completely disrupt animal agriculture. The report’s authors concluded that “by 2035, demand for cow products will have shrunk by 80% to 90%. Other livestock markets such as chicken, pig, and fish will follow a similar trajectory.”

Although slightly less bullish in its forecast, a 2019 analysis conducted by global consultancy AT Kearney offers additional information which should be of particular interest to investors: Researchers there estimate that, by 2040, 60% of meat will come from plant-based or cultivated meat. Even under more conservative scenarios, the industry stands to grow tremendously as consumers continue to make the switch away from animal-based products.

Cultivated meat made its debut in December of 2020, when Eat Just’s cultivated chicken nuggets went to market in Singapore. Additionally, cellular aquaculture company BlueNalu has stated they plan to launch a cultivated seafood product in the US this year, while Upside Foods (formerly known as Memphis Meats) and several other startups will likely bring products to market within the next 18 months. News items like these are educating the consumer base about new products, as well as priming public consciousness for near-term developments.

Venture capital is taking notice. Upside Foods raised a $161 million Series B round in early 2020, only to be outdone in March of this year with a $200 million raise by Eat Just. In May, Eat Just’s GOOD Meat division secured an additional $170 million in funding.

Agronomics (LSE: ANIC) is listed on the London Stock Exchange and currently has a market cap of $280 million. The company was founded in 2011 as Port Erin Biopharma and was focused on biotech. In 2019, it transitioned to a focus on alternative proteins and was renamed Agronomics.

As mentioned above, Agronomics is one of a handful of vehicles that offers retail investors exposure to the cultivated meat industry. Others include Meat-Tech 3D (NASDAQ: MITC), an Israeli cultivated meat company, and Eat Beyond Global (CSE: EATS), a Canadian fund.

VCs and accredited investors typically get the first opportunity when investing in private companies that are leveraging cutting-edge technology — but they also take on the inherent risks. Agronomics represents a unique opportunity to invest in potentially disruptive startups before their IPO or acquisition by publicly traded companies.

Agronomics was the cultivated meat industry’s most active investor in 2020, according to the Good Food Institute’s 2020 State of the Industry Report. Their investments that year included BlueNalu, Meatable, CellX, Mosa Meat, SuperMeat, and Shiok Meats.

The portfolio includes a cohort of the most well-capitalized companies across the pork, beef, and seafood verticals, but they are not focused exclusively on cultivated meat. They are also invested in precision fermentation (e.g., real dairy made without cows), cultivated leather, and cultivated pet food. Lastly, their investments in plant-based proteins round out a complete three-pillar, alt-protein portfolio.

Table 2 contains portfolio details. The market capitalizations are calculated based on post-money valuation from the most recent funding rounds and ownership percent described in Agronomics’ public financial statements. Consider BlueNalu; Agronomics has a 6% stake in the company with an estimated valuation of $300 million. Previous analysis of a successful BlueNalu scale-up modeled a $10 billion valuation in the next 5-10 years.

Jim Mellon is the lead investor behind Agronomics. He’s made big bets on longevity, food technology, and climate change as investment meta-thematics for the next 50 years. In addition to being an investor, Mellon’s a public figure, writing investment blog posts for Master Investor and frequenting CNBC and financial media to offer analysis and opinions. Most relevant for investing in cultivated meat, Mellon is the author of Moo’s Law, An Investor’s Guide to the New Agrarian Revolution. For a deep dive into Mellon’s view on the industry, this author interviewed him for Protein Report.

With all this investing opportunity comes a proportional risk — especially considering that much of the tech behind cultivated meat is still largely untested. While it’s possible that investment in this sector could pan out in a similar way to what we saw with Bitcoin (where a risk-averse Wall Street didn’t see the same value in cryptocurrencies as did many speculative traders), it’s not a given so it’s important to accurately assess all possible pitfalls.

The risks outlined below are arranged from macro- to firm-level to cover as much of the potential risk landscape as possible but are not ranked by probability or severity.

Macroeconomic Risk: Agronomics is listed within a sub-market of the London Stock Exchange called the Alternative Investment Market (AIM). Investing in anything on an international exchange characterizing itself as “alternative” should give even the most intrepid retail investor pause when stepping off the well-trod path of the S&P 500. In the event of an economic downturn, it’s likely that many of these positions would be the first to go in a liquidity crunch.

Currency Risk: Agronomics is based in the UK and over the last five years, the British sterling exchange rate for $1 has ranged from £0.69 to £0.86. Post-Brexit, investors should be prepared for the possibility of increased volatility in exchange rates.

Technology Scalability/Cost-Reduction: Cultivated meat could be a technology that fails, or is simply 20 years ahead of its time, much like Google Glass. There are still challenges to cost-parity with the legacy meat industry. An order of Eat Just’s cultivated chicken nuggets, for instance, is currently sold for $24 at a high-end Singapore restaurant. Further, there are analysts who remain skeptical of cultivated meat’s scalability and the cost-reduction capability necessary to make the product go mainstream. The primary cost-driver is the growth media to feed the cells — and reducing this cost is the Holy Grail of the cultivated meat industry.

That said, the price is falling rapidly, drawing comparisons to examples cited in Mellon’s book, Moo’s Law, and the work of Ron Shigeta (“Lab-Grown Meat Is Scaling Like the Internet”). Furthermore, Agronomics also holds investments in plant-based and fermentation proteins to hedge the technology risk of cultivated protein.

Management Performance: In addition to Mellon, who serves as Agronomics’ Non-Executive Director, the board and management team includes Finance Director, Denham Eke. Eke also leads the management team at the Burnbrae Group alongside Mellon. Burnbrae is a private international asset management company with a broad portfolio across financial services, IT, leisure, and life sciences. Anthony Chow is Agronomics’ Co-founder and CFA and has been with Burnbrae since 2007. Richard Reed serves as Chairman and his past experience includes co-founding Innocent Drinks, which was acquired by Coca-Cola in 2013. Following his departure, Reed launched Jam Jar Investments with his Innocent Drinks co-founders. Rounding out the Agronomics team is David Giampaolo, who serves as a Non-Executive Director, and is the Founder and Chief Executive of Pi Capital.

Agronomics Fund Structure: Instead of providing a dividend, Agronomics offers the flexibility to pursue products and ventures in cultivated meat with revenue generated from portfolio companies. It’s not structured as a 10-year VC fund that will be dissolved and returned to shareholders. All shares are described as common shares.

Startup Risk: Jim Mellon has publicly stated (including in a podcast with this writer) that Agronomics intends not only to further invest in companies in this sector but to also find the white space to launch a company. This is similar to his approach with Juvenescence and, while exciting, presents additional risk beyond picking successful startups for investment.

There’s little doubt about the need for a radically new approach to global protein production and consumption. While the issues driving this need are likely top-of-mind to Protein Report readers, readily available, public-facing information about investing in this sector is still not as accessible as it should be.

No investment is without risk, particularly when the technology behind it is as untested by scalability and capability pressures as those in cultivated meat. However, early access to new technology in a nascent industry certainly offers its share of possibility and may be a unique opportunity for the right investor.